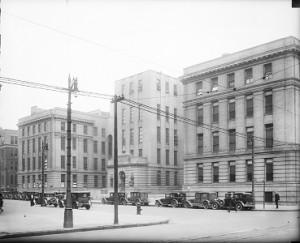 The present Academic Department grew directly from the community's needs that were apparent in the emergency room of the old Detroit General Hospital (DGH). Prior to the 1967 Detroit riots, patient care in that emergency room was provided exclusively by relatively junior medical and surgical house-staff. The response in the crisis of 1967 by that hospital, its staff, and its University-based faculty physicians was heroic, but the need for much enhanced medical staff oversight of the emergency room became obvious.

By the early 1970s, Dr. Krome had begun to develop an emergency physician staff that practiced exclusively in emergency medicine and the Emergency Department had become a formal part of the hospital's administrative structure.

After a four year hiatus in Texas, Dr. Bock returned to Detroit in 1985, successfully negotiated with Dean of Wayne State University Medical School and Emergency Medicine achieved the status of an Academic Department.

Over the next 15 years the Department established itself nationally as a premier educational and research institution. A second accredited residency, Sinai-Grace Hospital, joined the Department while patient volumes within the Detroit Medical Center exceeded 325,000 visits annually. Faculty achieved national prominence in leadership positions within the American College of Emergency Physicians, the American Board of Emergency Medicine, the Annals of Emergency Medicine, the American Medical Association, and the Institute of Medicine. 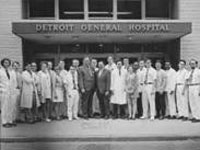 12, Dr. Brian J. O'Neil was appointed Interim Chair of our department by the Dean of the School of Medicine. Dr. O'Neil served in that position for one year. The Dean then convened a meeting of our faculty and asked if the faculy wished to conduct a national search for a Chair or was willing to vote for Dr. O'Neil as permanent Chair. Dr. O'Neil met with the Dean and several faculty members and stated that he felt he could not accept the appointment unless our department unamimously wanted him to serve in that position. A committee was formed and anonymously voted. The department overwhelmingly voted for Dr. O'Neil who now serves as the Munuswamy Dayanandan Endowed Chair of Emergency Medicine for Wayne State Univeristy and Specialist-in-Chief of Emergency Medicine at the Detroit Medical Center.